When I decided that I would start a foundation and buildings would have to be erected, I went to meet Francisco ‘Bobby’ Mañosa, the architect of the beautiful Coconut Palace in Manila.    Mr. Mañosa had devoted his life’s work to creating a Filipino identity in architecture.

I discussed my idea of a farm with bamboo buildings where boys, who lived in the streets, could see how beautiful life in the province could be.   The province (countryside) would be such a change from life living in the streets of Manila.   ‘Bobby’ thought my idea was great and with boys learning construction using the local bamboo, taught by local workers and that it would be a win-win situation.  So, with his blessing I decided that we would have buildings made out of local materials.  I had no idea what I was letting myself into.

I have made a timeline of what I was doing in construction, maintenance and farming.  It is not complete but I intend to keep going through all my photographs and making it complete.

It is important that this website gets released – finished or not.   Cullen must be stopped from maligning other people and hurting children.

I needed somewhere for Joseph Mariano to live as he was too ill to return to his own home. Joseph was taken care of in a tiny house I had already transformed in the barangay (village).  He would live there until I had something built for him and his  caretaker, Myra and her husband to live.   Other young children from the Aeta village stayed with him and we had lots of visitors.  I was living in Makati most of the time and returned to the village, weekly, to see the progress.

The irrigation canal was dug, by hand, not only through the farm but through our neighbor’s land so they could have water. This was the year that I learned what the river would do during rainy season, it was a bit frightening.  The water in the irrigation canal is coming from a mountain beside us, not from river.  The National Irrigation Authority joined my work to the river access which had been buried under 16ft of volcanic ash since the eruption of Mt. Pinatubo in 1991.  At last the rice farmers in the village could plant rice twice a year instead of only during rainy season.

I left the Philippines on September 12th to return to the States.  I had to put my house on the market, sell nearly everything I owned and pack what I thought would be useful in the Philippines.

I returned early in January and immediately had a party for all the friends I had missed. It was an extremely busy year but we had pigs in the piggery, fish in the pond.

I had no idea that the Visitors Center would become my home for so many years and the porch would become the ‘nursery.’  My staff made inquiries into getting electricity to the farm. We were told it would cost $10,000 so instead I used solar lights and lanterns.  I had electricity put in in 2007 for a few hundred dollars. 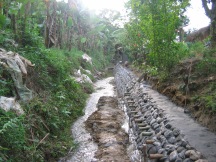 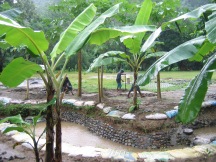 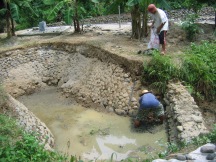 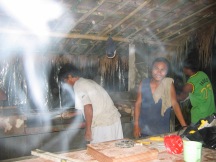 The men and I worked all day and all night to finish the counter in the kitchen.  It would accommodate the food for the Mayor and visitors the following afternoon.  I had chosen the date for the Groundbreaking Ceremony as October 12.  It was the death anniversary of my son, Robert

The gazebo which I had designed on the upside down bottom of a bleach bottle. When you are working with men who are talented but have no idea what a gazebo is you had to use models.  We made the pillars out of cement as I was quickly learning that using wood was not a great idea.  The same with the 3 Bahay Kubos.  The roof lasted for many years but was dismantled in 2013 after a nasty storm.

This was the year that Baby Michael Clemente, my first infant, and a few other young children came to the farm.  My reputation for taking care of people was getting known.

In January we had a Medical Mission and I had many patients to take care of.  The lettuce was growing and the little farm was doing well. 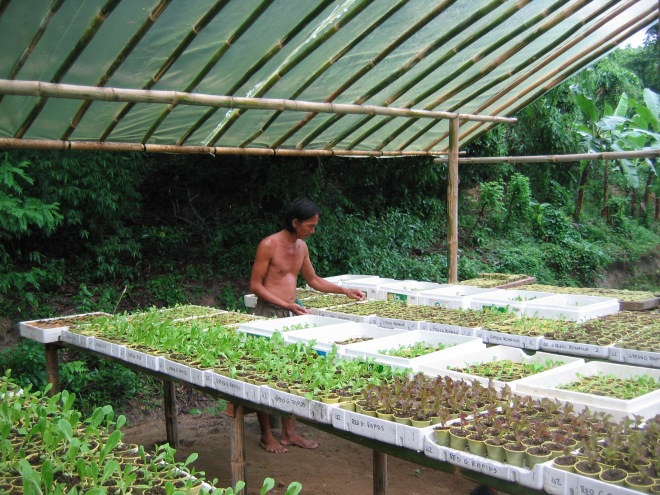 The Romans taught British people how to build roads that would not wash out.  I learned that bit of information in primary school.  So, it was simple for me to teach my men how to fix the road to the farm that was always washing out.  There were some old culvert that had lain by the side of the road that led to the farm and they had been there for years.

The men dug a trench for them and I hauled them with my truck. I found the proper level of the road with a lump of string.  With large rocks first, medium size next and the small ones last, filling it in all the time with volcanic ash, we made a road.   The road was level and did not wash out.   My men thought I was brilliant and I didn’t tell them any different.

David Joseph arrived and his sisters arrived 3 weeks later. The porch was getting a bit crowded but we managed.

This young lady, Sarah, was my first volunteer.  She was wonderful and without her help I doubt I could have got so much done.  I called her ‘The Prisoner of the Porch’ as that was where she stayed with 4 children while I worked with the men.  I found out later that she had never changed a diaper in her life but she became very proficient.  I missed her terribly when she left.  Joseph Mariano was so fond of her he named his first daughter after her.  A little Aeta girl with the name of Sarah.

I was very pleased to find out that Sarah had enjoyed her visit to me and she had told a friend about it.  Carrie was to arrived later in the year and I was most fortunate when she said she would stay for 5 weeks.  I felt so Blessed to have found two young women who believed in what I was doing.  Carrie was very extremely helpful  with patients and we had many long days together.

A donation from my new friends in England was sufficient to start digging the Well,  Water from this well provided our neighbors and the construction workers of the Preda Girl’s home.   I had never dug a well before and neither had my workers but we managed to do it.  This slideshow shows some of our work.  It was extremely hot with the sun reflecting off the volcanic ash.  The camera says 2008 as I had not known to set a date on a camera.

An extremely busy year with patients.   At one point I had 20 Aeta patients in the Gordon Hospital..all of them at the same time.  This story is in Medical Missions, Patients and Christenings.   I was fortunate enough to have a visit from American friends.   Mary Malarri, who was one of the founders of the Hope Medical Mission, came with her niece, Mary Shaw.   Without their help and advice it would have been quite difficult to manage.

Typhoon Ondoy hit in September 2013 followed by  Yolanda in October 2013.   Typhoon Yolanda was the typhoon that got so much media coverage.   Typhoon Yolanda’s damage though for us was considerable and a lot of the damage was caused by not only a landslide but was compounded by the culvert bridge that Cullen had place over the river in many years before.

As I have mentioned, previously, my cell/phone was taken from the farm on the day I was arrested.  The 4 gigs of photographs and videos of the damage and the rebuilding of structures that were damaged are therefore unavailable.

I was so excited that the job would get finished with the mason’s help.   I am quite capable of doing construction and I did a lot but with three children to get ready for school, an infant and a child who needed constant watching it was becoming arduous.

I loved my home in the Shenandoah Valley but I sold it to allow me the funds to take care of those who could not take care of themselves.  I was proud of the little farm and what I had been able to do with it.

Friends have told me that not only has the farm been ransacked and faucets, roofing, furniture, toys, hundreds of books and ornaments, etc., taken but the farm which was an organic little paradise is now the parking area for old trucks for the Mayor of Subic.

Hopefully, this webpage is enough to let you know that I was a capable woman who worked hard to make a beautiful home for the children I had the honor to take care of.